We left Kerrville, TX on Sunday, June 21st, and retraced the path we had taken when heading south in December. We drove 220 miles to Elm Mott, TX and spent one night at the I-35 RV Park. On Monday, we drove 264 miles to Texarkana, TX where we spent two nights at our usual campground, Shady Pines RV Park. On Wednesday, we drove 235 miles to Forrest City, AR where we spent the night at Delta Ridge RV Park.

The COVID-19 pandemic continued to impact our planning for our summer travels. We were already aware that Maine had implemented a requirement for a 14-day quarantine upon arriving in the state. However, this requirement was modified somewhat by allowing visitors to forego the quarantine if they can prove that they have gotten a negative COVID test within 72 hours of arriving in Maine. We hope to get tested while in New York, immediately before leaving for Maine.

Massachusetts also implemented a 14-day quarantine. We had planned to spend five nights in Massachusetts on our way to Maine but, for now, we have rescheduled this stop until our return trip in late September. We are hoping the quarantine requirements will have been lessened by then.

On June 24th, the governors of New York, Connecticut and New Jersey implemented a requirement for a 14-day quarantine upon arriving in their states for travelers coming from any of seven states with a spike in COVID cases, including Texas and Arkansas. We had booked reservations for four nights in Byron, NY, beginning July 5th. Since this would have been only 10 days after leaving Arkansas, we would have had to quarantine the entire time so, instead, we rerouted through Pennsylvania for the four nights. We will then head to Autumn Moon Campground in Middle Grove, NY on July 9th since, by then, 14 days will have passed since we left Arkansas.

On Thursday, June 25th, we drove 271 miles to Goodlettsville, TN where we spent a week at the Grand Ole RV Park. Our activities were limited due to COVID. Jason joined us the first morning for breakfast at Cracker Barrell. It was a different dining experience, due to the social distancing and sanitation requirements. Jason also came over for dinner several nights and we sat outside afterwards listening to live music. He picked up a pizza from Gino’s East one night on his way home from work. Jason’s roommate, Steve, joined us for spaghetti, salad and Butterfinger cake another night. We also were able to celebrate an early birthday with Lizzi at a Mexican restaurant near her house. 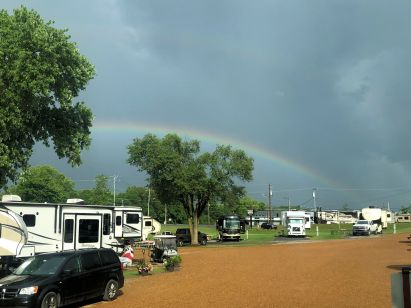 Jason with our dinner 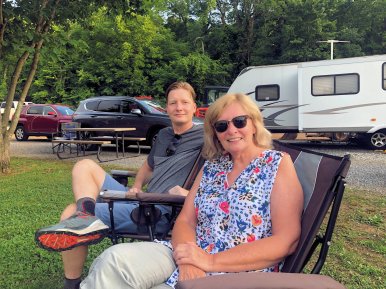 On June 30, the governors of New York, Connecticut and New Jersey doubled the number of states requiring quarantine, now 16. The new list included Tennessee so our five-day stay at Autumn Moon campground will be spent in quarantine. Had we known we would have to quarantine the entire stay, we would have just skipped New York and done our quarantine in Massachusetts instead. Unfortunately, it was now too late to cancel our New York reservation without a penalty.

On Thursday, July 2nd, we drove 275 miles to North Bend, OH (bordering Cincinnati) where we spent two nights at Indian Springs Campground. We had overnighted at this campground twice before but, because it was considered part of the July 4th weekend, we were required to stay for a two-night minimum. This turned out to be fortuitous since Jarrod and Jess flew in to Cincinnati that day to visit Jess’ family. They dropped by to visit on Friday morning and then we joined them for lunch at the home of Jess’ father and stepmother, Henry and Sandy Mollman. We enjoyed sitting outside and had a very filling meal, topped off with homemade ice cream.

On Saturday, July 4th, we drove 267 miles to Streetsboro, OH where we overnighted at the Streetsboro / SE Cleveland KOA. The campground was in full swing when we arrived and there was little evidence of social distancing going on. The pool was crowded and many large groups were gathered.

On Sunday, July 5th, we drove 270 miles to New Columbia, PA where we spent four nights at the Williamsport South / Nittany Mountain KOA. It is one of the upscale Holiday KOAs and we had a large pull-through site with no neighbors nearby. One of the popular activities was the twice-daily feeding time at the petting zoo. We joined the youngsters in the pen (masks were required) where we fed and played with the goats.

We had planned to hike in the area but torrential rain overnight forced us to scrap that idea. Instead, we attempted to hike the nature trail connected to the campground but had to turn around when we encountered No Trespassing signs. 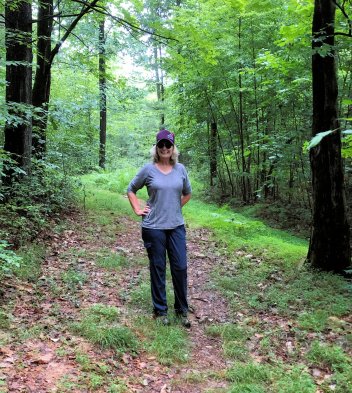 On Monday, we drove to Lewisburg. Our first stop was at the Street of Shops. Located completely indoors in a restored historic woolen mill, this large building contains 375 shops selling a wide variety of merchandise (mostly antiques and collectibles). We spent about two hours strolling through room after room.

Later, we visited downtown Lewisburg and had lunch at a local pizzeria where Phil had a cheesesteak and Jan had an eggplant parm sub. Both were delicious.  After lunch, we drove through the largely-empty campus of Bucknell University and visited Soldier’s Memorial Park. 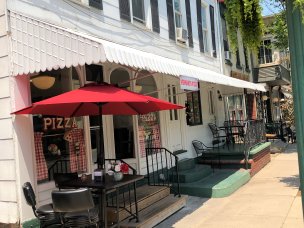 Phil with his cheesesteak

On Tuesday, we drove to Williamsport, PA. Our first stop was at Original Field, the baseball field where the Little League World Series was held for the first 12 years. There wasn’t much to see at this complex, which is now used by the local softball league. We next drove along Millionaire’s Row, where lumber barons had built huge Victorian homes at the turn of the century. Williamsport once had more millionaires per-capital than anywhere else in the world, but this area was definitely showing its age. Our final stop was at the current home of the Little League World Series. With the World Series cancelled for 2020, we were free to roam around the two stadiums and visited the Casey at the Bat sculpture.

Jan at Casey at the Bat sculpture

Phil at Casey at the Bat sculpture 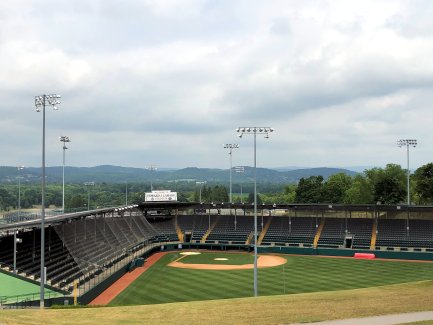 Since Maine would allow us to avoid the 14-day quarantine if we could get a COVID test done within 72 hours of entering the state, we had been exploring options for testing while in New York. Most were limited to New York residents or required a doctor’s referral.  On Tuesday, Phil was able to get us signed up for free COVID tests at RiteAid in Colonie, NY on Saturday, July 11th. The test results are normally available in 2-7 days but, due to the demand, it may take longer so we may still have to quarantine for some period in Maine.

On Wednesday, we returned to Lewisburg and visited the Farmers Market. This was one of the nicest and largest farmers market we have visited. They had a huge variety of local specialties, vegetables, fruits, baked goods and crafts. Many of the vendors were Amish. There was even a Schlegel Farms, Jan’s maiden name, so we had to buy from them. Since we knew it would take a long time to see everything, Phil left Jan at the farmers market and headed to Walmart to buy enough food to last us through the full quarantine periods. Jan also loaded herself down with fresh meats and vegetables, as well as a lemon meringue pie and fresh bagels.

On Thursday, we drove 300 miles to Middle Grove, NY (near Saratoga Springs) where we had made reservations for five nights at Autumn Moon Campground. The first 270 miles were on interstates but the travel was slower than hoped due to lots of road work zones. The final 30 miles were quite challenging as they involved many turns on small country roads. When we approached the final turn, Phil’s GPS chimed as he neared a couple of gravel roads. Since this is the indication that he is at the turning point, Phil pulled up the first gravel road and drove up to the road to what he hoped was the campground office. Jan’s GPS showed that the correct turn was 400 feet farther but she couldn’t call Phil before he made the turn. As it turned out, Phil had pulled into a farmer’s driveway. We spent most of the next hour trying to get the fifth wheel turned around. It would have been easier if not for a BMW that was parked next to the house. Jan knocked on the door of the house but no one answered. After multiple attempts, we got turned around and made our way to the campground.

The owners of the Autumn Moon Campground were quite friendly but the campground was less impressive than where we’d normally stay. Since we only had 30 amps available, we were limited to using one air conditioner. Even at that, the circuit breaker on the pedestal kept flipping every few minutes. Phil finally solved that problem by turning off the charger to our batteries. It was 82 degrees in our living room and it took a couple of hours before we got the temperature down to a pleasant 72 degrees.

The requirements for quarantine vary by state and, even for a given state, are quite fluid. Phil discovered, after we arrived in New York, that Pennsylvania had implemented a quarantine on July 1st for travelers from 15 states, including Tennessee. Oops!

On Saturday, we drove 30 miles to Colonie, NY to get our COVID tests. The process was somewhat different than in the YouTube we had watched. We pulled up to the drive-through window at the RiteAid and the pharmacist gave us our test kits. He explained the procedure, which consisted of inserting the test swab one inch into one nostril, rotating it twice, holding it in place for 15 seconds and then repeating in the other nostril. It wasn’t too unpleasant, although both of us had watery eyes and Phil sneezed twice. The test results were supposed to arrive via email in 2-7 days but we were pleasantly surprised when we both received negative test results on Monday afternoon. That will eliminate any need to quarantine when we arrive in Maine on Tuesday.