On Thursday, March 12th, we began our final month at Tropical Trails with a boat outing. A group of eleven from Tropical Trails met at the Dishmans’ condo on South Padre Island. Hill Dishman had his own boat and had borrowed one from a neighbor. Although windy, it was a beautiful day for a boat ride. The activity for the afternoon included a poker crawl in which we picked up a paying card at each stop and the person ending up with the best poker hand would win the pot. Our stops were at Parrot Eyes Restaurant and Bar, Longboard Bar & Grill, Driftwood Landing and Laguna Bob’s. Phil had the best hand through the first three stops, then fell into third place on the fourth card drawn. Fortunately, the ‘4’ he was dealt as his fifth card gave him two pairs and he ended up with the best hand, earning $40 from the pot.

Ron & Mary on the back of Hill’s boat

The group at Parrot Eyes 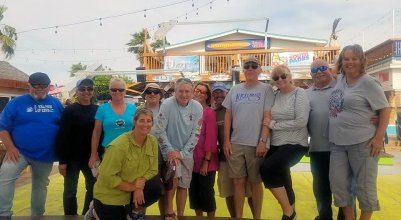 The group at Longboard Grill

The group at Driftwood Landing 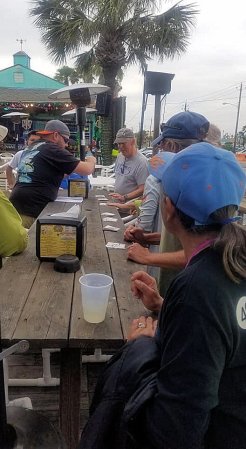 On Friday a large group from Tropical Trails took a 2 ½-hour tram tour at Laguna Atascosa National Wildlife Refuge. The park, which encompasses over 97,000 acres, was established in 1946 to provide habitat for wintering waterfowl and other migratory birds. We had visited the park a couple of years before but had not taken the tram tour. The tram ride enabled us to see much more of the refuge than we had seen before. Unfortunately the speakers in our car were not working so we were unable to hear much of what the tour guide was saying. One of the highlights was seeing a small rattlesnake slithering next to our stopped tram.

Phil at the plaque 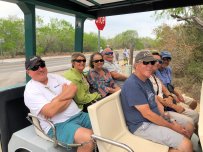 Back rows of our tram car

Front rows of our tram car

View of tram from overlook

That evening we had an ice cream social, followed by two games of LCR. Phil won one of the games, earning $4.50 in winnings.  A lucky couple of days!

On Sunday afternoon, Jan participated in the beanbag toss tournament.  We later met the Rykals and Ehlenfeldts at Longboard Bar & Grill and listened to Shake & Bake perform. We then headed to Pier 19 for dinner.

Tuesday, March 17th, was St. Patrick’s Day. We celebrated with a Happy Hour on the patio at Tropical Trails. The Rykals and Ehlenfeldts joined us for the get-together.

On Wednesday evening, we had a fish fry at Tropical Trails. Hill Dishman fried up a lot of trout that he had caught on his boat. Everyone else brought a side dish. 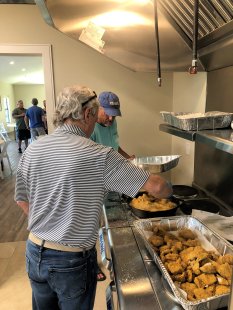 Plenty of fried fish for dinner

On Thursday we headed over to Winter Haven and had a belated St. Patrick’s Day feast with the Rykals, Ehlenfeldts and some of their neighbors. We enjoyed lots of corned beef and cabbage. With the current shortage of toilet paper, Tom and Roxi should have thought twice before letting Beth use their bathroom.

By Friday, the effects of the coronavirus (COVID-19) pandemic really began to impact our activities. The city of Brownsville closed the schools and imposed a curfew between midnight and 5 a.m. (not that that affected us). Restaurants were restricted to take-out. South Padre Island implemented restrictions on gatherings and closed restaurants and bars.  Phil went to H-E-B for groceries and had to stand in a long line to get in the store. Once inside, he found many of the shelves were empty. Toilet paper, paper towels, disinfectants, eggs and canned goods were unavailable, both in the stores and online.

At Tropical Trails, life was getting increasingly boring. In addition to many of the campers having already departed, some of the remaining campers decided they would self-isolate. This left the campground, which had already been fairly vacant all winter, seem almost like a ghost town. Even when we did see other people, there was very little interaction. There were only four people playing pickleball on Friday and, by Saturday, this had dropped to just Phil and Beth Petruska.

On Saturday afternoon, we finally got around to flying the kite we had purchased when Jason was visiting. Since the kite was only rated for up to 18 mph winds, we had not had many opportunities to fly it earlier. It was quite easy to assemble and flew quite well. The wind was somewhat stronger on Sunday and we flew the kite again. This time Phil relaxed in one of our lawn chairs while the kite soared very high. He may have been testing the limits of the string as the kite was really pulling very hard.

Phil relaxing while kiting on Sunday 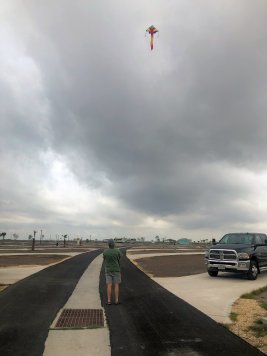 Jan helping to launch our kite

The boredom continued the following week as the pandemic’s spread and resulting stock market drop dominated the news. In addition to the usual strong winds, we had several days with highs in the 90s. Our only interaction with our fellow campers came from a distance. Beth decided not to play pickleball anymore due to COVID-19 concerns, but Phil did manage to arrange to play singles with Hill Dishman a couple of days. Jan made several trips to the fitness center to run on the treadmill. We managed to ride our bikes on occasions when the wind died down somewhat.  On two evenings, we ventured up to the Amenity Center to play shuffleboard and dip our feet in the spa. One night we actually went swimming in the pool for the first time this winter, but spent most of our time relaxing in the spa.

Hill came by on Monday and gave us some of the fish he had caught. We grilled Cajun red fish on the half shell for dinner on Tuesday. 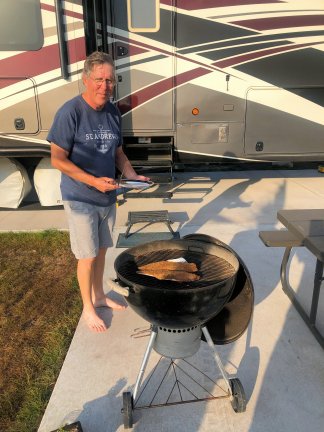 We rarely left the campground, except for occasional trips to the grocery stores. Phil got up early on Tuesday and went to Wal-Mart for their once-a-week Senior Hour at 6 a.m. He got in line at 5:30 and was glad he had arrived early. By 6 a.m. the line was quite long. Although he was able to buy eggs, paper towels and disinfectants (which are in short supply), many of the shelves were empty. We received notice from the campground office that the H-E-B in Port Isabel had been well-stocked and without lines on Thursday. With nothing else to do, we headed there on Friday to see if we could find the things that had been unavailable at Wal-Mart. We did have to stay in line outside for about 10 minutes but, once inside, we were able to find most of our desired groceries.

One of the greatest shortages during the pandemic was toilet paper, with people hoarding it as panic set in. After checking the Sam’s Club website repeatedly for several days, Phil was able to order toilet paper. His only option was to get a 36-roll pack, which should last us a long time. When it arrived on March 31st, it was such a big deal that we had to post it on Facebook. The post resulted in 69 likes and 45 comments. Facebook became a popular means for people to try to find humor in the face of the pandemic. Leslie, one of our Tropical Trails friends, posted a video showing how to make a mask out of boxer shorts and, of course, Phil had to try it. The things people do when they have too much spare time on their hands!

During the remaining two weeks at Tropical Trails, our days largely fell into a routine. Although Phil played pickleball with Hill several mornings each week and we rode our bikes when the wind permitted, most of our days were spent sitting in our trailer. We both killed a lot of time playing on our phones, Phil did a lot of reading, and Jan worked on Diamond Dots and cleaning house. We did visit the pool several evenings, where we largely had the place to ourselves. About the only times we left the campground were for trips to the grocery store. While it was not the camping experience we had hoped for, we were very grateful to have a place where it was so easy to self-quarantine. In a campground with over 300 sites, we were down to 14 RVs on the property by the final two weeks (even at the peak this winter, there had never been more than about 35). We were also grateful that none of our friends and family contracted the coronavirus during these weeks.

We had planned to leave Tropical Trails on April 12th, Easter Sunday. In anticipation of the trip, Phil checked the truck’s tire pressures two days before. After being unable to get any pressure reading on one of the dually tires, he discovered that the tire had a huge tear in the belts. He was able to order a new tire but it wouldn’t arrive until Monday. This caused us to delay our departure for two days. This was actually fortuitous since the weather on Easter was terrible. The temperature hit a high of 103 degrees (blowing away the previous record of 95) and the winds were very strong, with gusts exceeding 40 mph. In addition, since April 12th was our 17th wedding anniversary, we were able to enjoy a relaxing day. Phil grilled some T-bones for dinner and then we headed to the pool.

Jan in hot tub at sunset 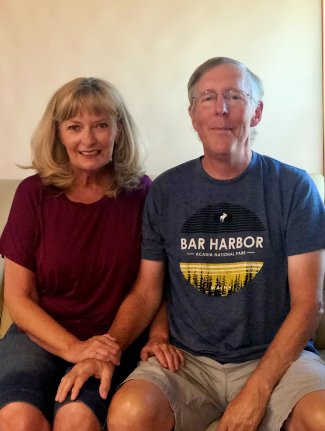 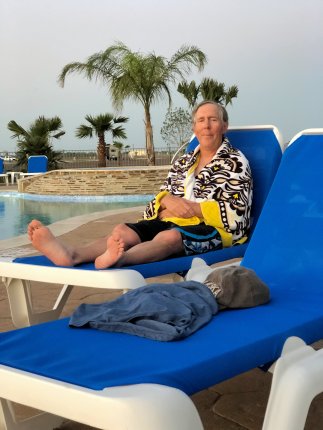 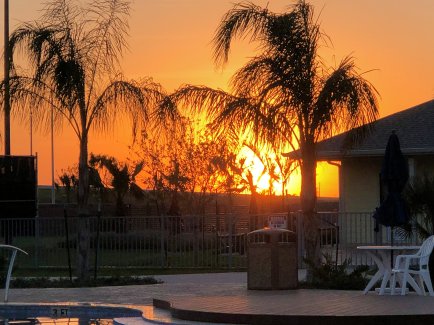 Sunset from the pool

Jan in hot tub at sunset 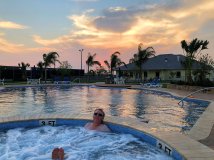 On Monday, Phil took the truck to Discount Tire to get the new tire installed. Due to short staffing caused by COVID-19, he had to sit in the parking lot for two hours before getting to pull the truck into the service bay. We got up early on Tuesday and we thought we were ready to leave at 8:30 am. One of the last duties is to fold up the steps but, this time, one of the steps would not budge. We tried dousing it with WD-40 but that had no effect. Hill drove by and offered us some help. He had a couple of his guys work on the step and, after much effort, they managed to get it to fold up so we could depart. Our departure was delayed by an hour but we were just happy to be able to go.