On Saturday, September 29th, we began our quick trip across the Western and Midwestern U.S. to visit family again in Nashville and get repairs done on our truck and RV. Our first drive was 244 miles to Richland, WA where we spent two nights at Horn Rapids RV Park. Although hilly, the drive was fairly easy after we got past Seattle. The RV park was quite large and nicer than most we’ve visited. Although it was rather cool and breezy, Phil was able to give our rig a long-overdue washing.

On Monday, October 1st, we drove 268 miles to Caldwell, ID where we spent two nights at Ambassador RV Resort. At about 9 am on Tuesday morning, Phil discovered that our bathroom door was locked from the inside. The lock had always been difficult to open and, as a result, we never locked the door. However, the lock had been getting loose in recent days and it appears that it must have shifted into a locked position by accident. We spent the next couple of hours trying to unlock the door but with no success. We attempted to remove the hinges on the door but this also proved unsuccessful. When we called the manufacturer, we learned that the hinges were not removable. Finally, we called a locksmith and had to wait an hour for his arrival. Fortunately the campground bathrooms were nearby and very clean. The locksmith had no more success than we’d had so we told him he was free to drill off the old lock. Even after drilling off the handle, he still had a hard time disengaging the lock mechanism. After the locksmith left, we drove into Caldwell and bought a new door lock at True Value. We believe the new lock is of higher quality than the original.

On Wednesday we drove 317 miles to Logan, UT where we stayed at Traveland RV Park. We had some difficulty finding the RV park since it was tucked behind a Quality Inn. We could see the RVs parked there but had to circle around the neighborhood before we finally found the entrance. We managed to get set up before the rains began but, once they started, they continued almost non-stop for the two days. During one slack period, Phil managed to set up the grill but ended up grilling our steak in the rain. The lousy weather was most unfortunate because the little we saw of Logan was quite lovely.

On Friday we drove 285 miles to Rawlins, WY where we spent the night at the Rawlins KOA. We had originally planned to spend two nights in Rawlins but the nighttime lows were below freezing and the forecast for Saturday night was calling for 1-3 inches of snow and slick highways on Sunday. The first 100 miles of our drive as we left Utah was through the canyons and, although winding and hilly, was quite beautiful. However, the rest of the trip was on the interstate and took us across wide open plains. 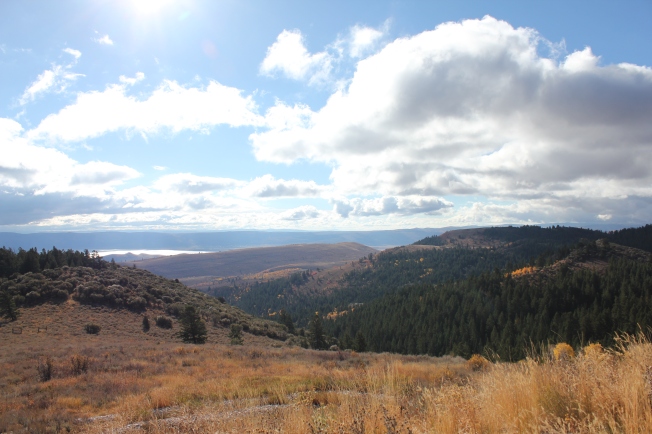 On Saturday we got an early start. The temperature was only 31 degrees when we were packing to go but, fortunately, the sun made it feel somewhat warmer. We drove 250 miles, all on I-80, to Sidney, NE. The weather was clear for most of the drive but, shortly after passing Laramie, WY, we ran into thick fog. We exited the interstate for a rest stop but the sign was covered with snow and we made a wrong turn. Fortunately we found a parking lot about a mile down the road and were able to get turned around. We inquired about the fog at the information counter in the rest stop and were told we would be in the fog for a long time. We could see semis continuing down the interstate so we decided to give it a go. When one of the semis left the rest stop, we followed closely behind him and were able to follow his taillights until the fog cleared. Fortunately the man at the information booth was wrong and the fog cleared within a few miles.

Lincoln statue in fog and snow

Our rig in the fog

We spent the night at the Cabella’s RV Park in Sidney, NE where we had stayed in June 2017. The RV park is first come, first serve but we were able to get a good spot when we arrived around 4 pm. The RV park is next to a Cabella’s store and across the parking lot from the Cabella’s corporate headquarters. We learned that the Cabella’s corporation had been bought out by Bass Pro Shops in early 2018 and the loss of so many corporate jobs in such a small town had led to seriously depressed real estate market and local economy. We contributed to the economy by dining at Margaritas Family Mexican restaurant. The food was delicious, very filling, and, based on the largely Hispanic clientele, authentic Mexican cooking.

It rained most of the night and we packed up Sunday morning in a light drizzle. We continued our drive across Nebraska with another 260 miles on I-80. It rained for most of the drive but stopped long enough for us to get set up at the Grand Island, NE KOA where we stayed for two nights. The name of the campground was somewhat deceptive as the town of Grand Island was nine miles away. The forecast had called for rain and thunderstorms for the entire stay but, fortunately, it only rained hard at night. Due to the lousy weather, we didn’t do anything all day on Monday except grocery shopping and laundry.

On Tuesday, October 9th, we drove 265 miles through steady rain to Adel, IA where we spent two nights at the Des Moines West KOA. Again, the name of the campground was deceptive as it is over 20 miles from Des Moines.

Over the previous week we had begun to experience a lot of problems with our fresh water tank. When we were hooked up to campground water, some of the water would bypass the check valve and find its way into the fresh water tank. This meant that we needed to drain the fresh tank almost entirely each time we needed to drive. When the weather gets below freezing, we need to disconnect the hose from the campground water and just use the water in the fresh water tank. Unfortunately, our water pump started running for a few seconds each minute, even when the water wasn’t running. This would generally indicate that we had a leak somewhere but we couldn’t find one. We had added these issues to our list of repairs to be addressed at our dealer on October 29th. However, the problem became a bigger issue before we could get there. About half way through our drive to Adel, IA, we stopped at a rest area and Jan noticed that about an 8-foot section of the door side panel had pulled away from the undercarriage. We were able to drive the rest of the way to our campground and had to wait until the rain stopped before we could better inspect the damage. It appears that the subflooring had gotten waterlogged from the water leak and this extra weight had forced out the screws holding the paneling in place. In addition, a pipe that can be used to hook up to the propane tanks had pulled out from the flooring. Phil crawled under our rig and took some pictures to send to the dealer. He also wired the pipe in place to keep it secured until we can get to the dealer. It’s times like this that we miss having a house! We had planned to stay at a Corp of Engineers park after leaving Pella but, since they don’t have water at the sites, we would have had to rely entirely on our fresh water tank and our water pump for three days. With that out of the question, we had to find another campground for our next stop. 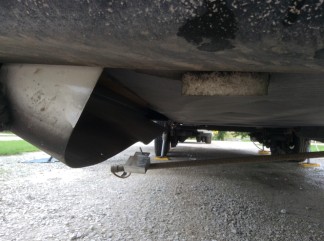 Panel pulled away from undercarriage 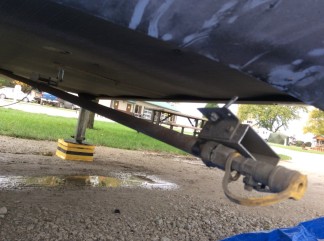 LP line that pulled away from undercarriage

With all the rainy weather, we had not been able to do any sightseeing since we left Washington. After doing what we could do to address the damage, we decided to drive 16 miles to Winterset, IA and visit the John Wayne museum and birthplace. Winterset turned out to be a lovely little town that has retained much of its heritage.

We also visited the Winterset visitor center and got a map showing the locations of the covered bridges made famous by the 1995 film The Bridges of Madison County, starring Clint Eastwood and Meryl Streep. We visited four of the bridges. 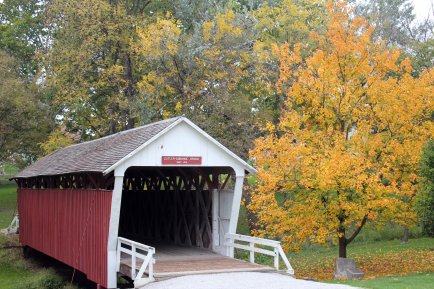 On Thursday we drove 70 miles to Kellogg, IA where we stayed for three nights at the Kellogg RV Park. The RV park is tucked behind a Phillips 66 gas station but had long pull-through sites and full hookups.

On Friday morning, Phil woke up at 5:40 am and drove to Oskaloosa, IA for a 7 am appointment at Kelderman Manufacturing for repair of our truck’s rear suspension air bags that were damaged when we were in the Yukon. In the afternoon we drove to Grinnell, IA. We walked around the historic downtown district and visited the Merchants National Bank building. The bank building is one of eight Midwestern “jewel-box” banks designed by Louis Sullivan, legendary American architect and mentor to Frank Lloyd Wright. It was constructed in 1914 and has been a National Historic Landmark since 1976. In 1999, the bank building was taken over by the Grinnell Area Chamber of Commerce. 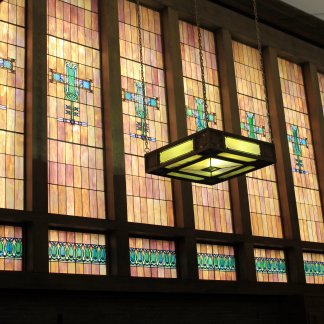 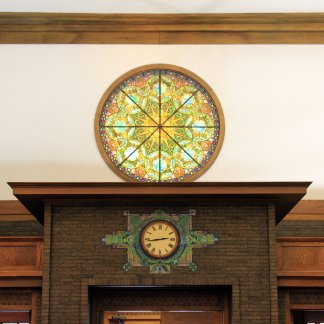 This date represented our third anniversary of being full-time RVers. When we started our adventure, we committed to at least three years so we wouldn’t give up prematurely if we ran into problems. Over the past three years, we have covered about 37,000 miles. Although we’ve faced the occasional challenge (especially recently), overall we’ve loved our experience and don’t see us bringing this lifestyle to a conclusion any time soon. We will probably cut back somewhat on our mileage but aren’t ready to come off the road.

On Sunday, October 14th, we drove 306 miles to St. Peters, MO where we spent two nights at St. Peters 370 Lakeview Park. Although only the first 70 miles were on I-80, the rest of the drive was on a divided highway that was actually quite a bit smoother than the interstate. We had stayed at St. Peters 370 Lakeview Park three years earlier and had struggled to get into a back-in site. This time we had reserved a pull-through site and it was much easier. Unlike three years earlier, the weather was quite cold and we were unable to enjoy the walkway around the lake. Other than doing laundry and making a trip to Sam’s Club and WalMart, we didn’t do much on Monday.

On Tuesday we drove 198 miles to Paducah, KY where we spent the night at Fern Lake Campground. The campground was nothing special but we had a pull-through site within ¼ mile of the interstate, all we really needed for an overnight stay. We walked across the road to El Torito for an outstanding Mexican dinner.

On Wednesday we completed our drive to Tennessee by driving 147 miles to Nashville.