Our arrival in Dawson City, YT on Sunday, August 5th, came as a relief after making the challenging drive over the Top of the World highway. We booked a four-night stay at Gold Rush Campground, which is located within a short walk of downtown Dawson City.

Dawson City has a very colorful history. Gold was discovered on Bonanza Creek in August 1896. When word of gold being discovered in the Yukon reached the Lower 48, the Gold Rush began. Many gold seekers initially attempted to carry their goods over the icy Chilkoot Pass, often through blizzards and sub-zero temperatures. Once the Yukon River thawed in May of 1998, hundreds of boatloads of would-be miners arrived day and night. The population grew from 1,500 in spring 1997 to 30,000 two years later. This made Dawson City the biggest city in North America north of Seattle and west of Winnipeg. Unfortunately, by the time most of the stampeders arrived, the profitable claims had already been staked and the population dropped to 9,100 by 1900, and to 975 by 1921.  The current population is about 2,100.

The rapid drop in population at the end of the Gold Rush led to the abandonment of buildings rather than their demolition for redevelopment. In the 1960’s, a serious decline in mining caused the community to welcome tourism and invite investment in Dawson City’s heritage. Many of the original buildings have been restored and rehabilitated. Most of the buildings are built on risers due to frost heaves in the permafrost.  The streets are still dirt but there are boardwalks for pedestrians. We spent the first couple of days exploring the town and visiting the many shops. 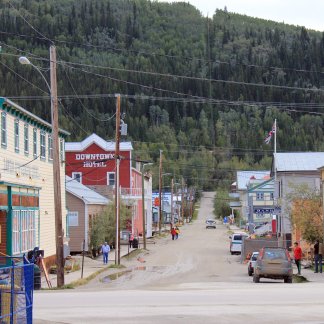 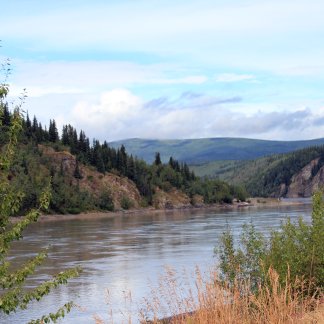 On Sunday night, we had dinner at Klondike Kate’s. On Monday night, we attended the can-can show at Diamond Tooth Gertie’s Gambling Hall. The ticket for admission to Gertie’s was good for the entire summer so, of course, we had to return on Tuesday night to get our money’s worth. 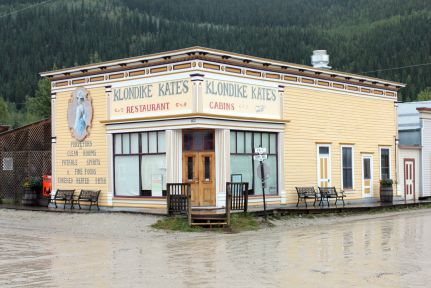 On Tuesday the rain stopped long enough for us to do some exploring outside of downtown. We stopped to see Jack London’s cabin. Jack London had come to the Klondike in 1897 as a prospector.  Disillusioned with gold mining and afflicted with scurvy, he returned to California in 1898.  He later wrote two successful novels about the north, White Fang and Call of the Wild.  His cabin was originally located on Henderson Creek, in the Klondike goldfields.  We next headed up the mountainside for 15 minutes until we reached the peak, known as Midnight Dome. From Midnight Dome we had spectacular views of the Yukon River and Dawson City. 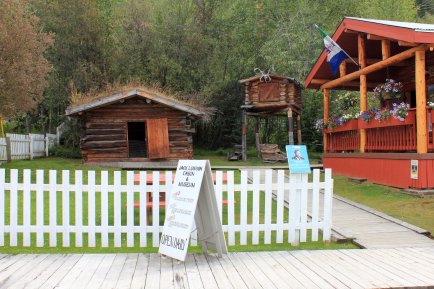 View of Yukon River and Dawson City from Midngiht Dome

Phil and Jan at Midnight Dome 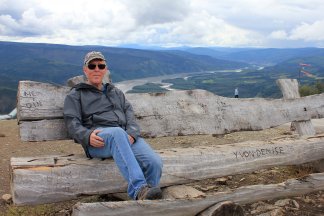 Next we visited the goldfields that started the Gold Rush. We stopped at Dredge No. 4, the largest wooden dredge in the world. Over 46 years, Dredge No. 4 recovered eight metric tons of gold. At top production, almost 50 pounds of gold were recovered every three or four days.

We continued on to Claim No. 6 which has been set up by the Klondike Visitors Association to allow tourists to experience gold panning in the creek. Since we didn’t have gold pans, we tried our luck with cake pans. We found a few small grains that may have been gold but not enough to keep.

On our return trip, we stopped at the Discovery Claim and saw the spot of the big strike that started the Gold Rush. On August 17, 1986, Skookum Jim, Tagish Charlie and George Carmack were traveling to the Klondike River and, short on food, Jim shot a moose. He went to the creek for a drink and found gold. The three men staked claims to the richest spots they found and George went to Forty Miles to record them.

On Wednesday we did a guided walking tour of historic Dawson City. The tour was entitled “Strange Things Done in the Midnight Sun.” In addition to visiting a number of historic buildings, our guide told little-known stories about real-life residents from the Gold Rush era.

Bank of North America office, with gold assayer office in back

Later we attended a program at the Palace Grand Theater. The three-story theater, which provided entertainment to the miners during the Gold Rush days, has been recently renovated to its original design. 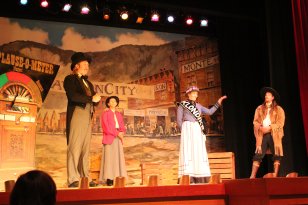 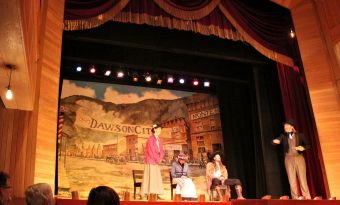 We end our visit to Dawson City with a poem by Robert Service, heralded as the “bard of the Klondike.” Service was a teller for the Canadian Bank of Commerce and lived in Dawson City from 1909 until 1912.

On Thursday, August 9th, we began our 2,500 mile trip southward, back to the Lower 48. We drove 222 miles on the Klondike Highway to Carmarks, YT where we spent the night at the RV park at Hotel Carmacks. With the exception of our Top of the World trek, this was the worst driving experience of our trip. We hit multiple construction zones, several where we had to wait for a pilot car to guide us through unpaved sections. The areas that weren’t under construction needed to be. We had to drive very carefully and slowly through mile after mile of potholes.

As we neared Carmarks, we stopped at a viewpoint overlooking Five Finger Rapid. During the 1898 Klondike Gold Rush, thousands of prospectors navigated their handmade and overloaded boats and rafts 800 miles from Bennett Lake to Dawson City. Five Finger Rapid was a major obstacle along the route and more than a few stampeders ended up in the water  after choosing the wrong channel. Whitehorse-bound sternwheelers had to winch themselves over a 1-2 foot drop in the navigable channel until the underwater obstacle was blasted away.

After dinner, we strolled along the Yukon River in Carmacks. 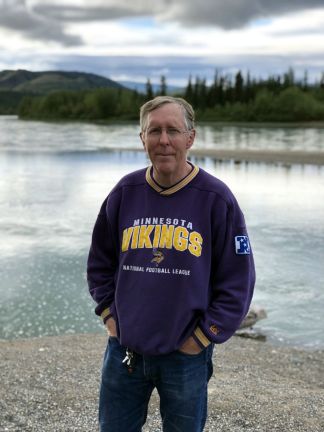 Phil on banks of Yukon River

On Friday we drove 189 miles to Haines Junction where we spent the night at the RV park adjoining the Fas Gas service station. The first half of the trip was spent on the Klondike Highway and the balance was on the Alaska Highway. Although the roads were not exactly smooth and still had a lot of potholes and frost heaves, the day’s drive was considerably easier than the previous day. The scenery was beautiful.

We stopped at Braeburn Lodge for a cinnamon roll which was large enough for four people. We saved half of it for Saturday. Braeburn Lodge is an official checkpoint for the 1,000-mile Yukon Quest International Sled Dog Race and there was dog race paraphernalia all over the walls.