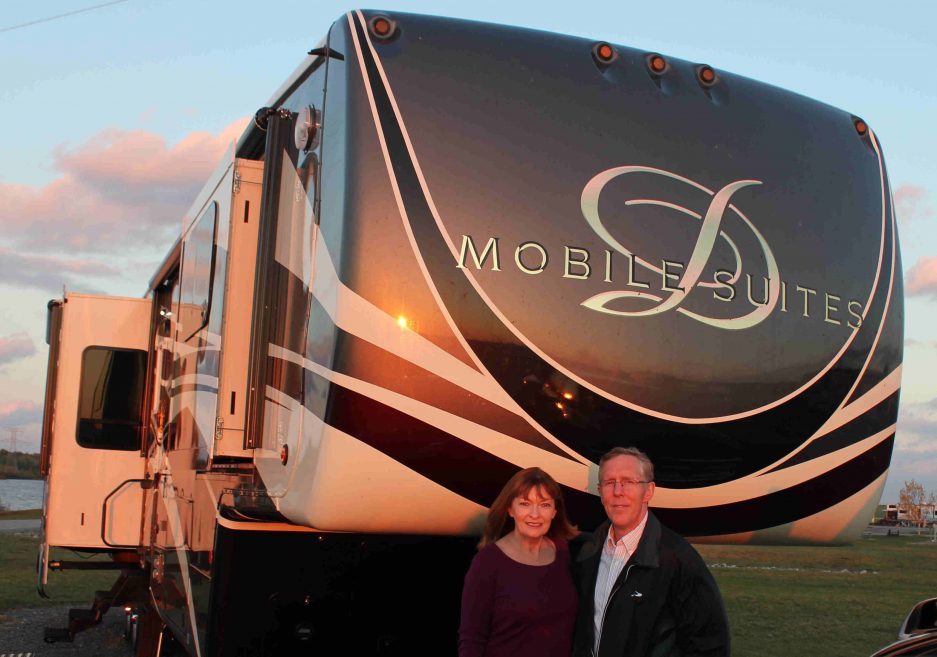 On the morning of June 8th we had to vacate our campsite in Wapiti, WY but we really didn’t know where we should go. We had already extended our stay at Yellowstone Valley Inn & RV Park by two nights but couldn’t extend for the night of June 8th.

Earlier that week we had learned from the parts person at Pierce RV Superstore in Billings, MT, that the replacement front jack was scheduled to arrive at about noon on June 8th. However, several attempts to reach Wes, the service manager, were unsuccessful and we were told that Wes wouldn’t schedule the service work until he had confirmation that the part had arrived.

We waited until checkout time at 11 am on June 8th before pulling out and heading north to Montana. Since the only available campsite in Billings was at the KOA for $83 per night, we decided to drive 125 miles to Columbus, MT (40 miles west of the RV dealer) and then evaluate our options. We reached Columbus at about 2 pm and, after lunch at McDonalds, Phil called the parts department and was able to confirm that the replacement part had arrived. Phil then spoke with Wes and let him know the part had arrived and that we wanted to bring our rig in for service on Friday, June 9th. Wes agreed to have us bring our rig in on Friday but told Phil that he probably wouldn’t be able to complete the work until Monday, June 12th.

Due to the uncertainty of our repair schedule, we had not yet reserved a campsite for the night of June 8th. After speaking with Wes, we attempted to get a campsite at Mountain Range RV Park in Columbus. We arrived at the campground office at about 2:20 pm and found a sign that said that the campground office was closed until 3 pm. While waiting for the owner to return from lunch, Phil wandered around the campground and only found one open site with 50 amp service. Since the temperature was in the 90s, we needed 50 amp to be able to run both air conditioners. When the owner returned from lunch, Phil was told that the one open spot he had found was reserved. As we prepared to leave, the owner came out and told Phil that the site was available after all. It turned out that the couple who had reserved the open site had arrived earlier and had set up in a 30 amp site. Since they didn’t want to move again, the open site became available to us and we had a home for the night.

Since we didn’t know how long our rig would be in the shop and if we would have access to it during the nights, we packed our suitcase for three nights and prepared to stay in a hotel, if necessary. On June 9th we drove to the RV dealer in Billings and arrived at 9:30 am. Wes wasn’t around yet so we checked in with another service tech, then left to kill the day in Billings, including three hours at the Billings library. We returned to the RV dealer to check on the status of the repair work and learned from Wes that the repair was not yet completed. We were not surprised since our rig was still hitched to our truck. Initially Wes told us that the mechanic was off until Monday. Wes later learned that the mechanic would be in on Saturday and speculated that the repair would be completed then. We also learned that the dealership has a number of RV sites with full hookups in their parking lot so we were able to snag a free site for Friday night.

On Saturday morning we packed up and dropped off the rig at 9:30 am. We killed another day in Billings, including another three hours at the Billings library. Mid-morning, we did stop back at the RV dealer and saw that our rig was no longer hitched to the truck. This was an encouraging sign since it had been five weeks since we’d been able to unhitch it. When we returned at 4 pm, we learned that the repair had been completed. In addition to replacing the defective jack, the mechanic had had to fix eight leaking fittings due to defective O rings.

Since it was late in the day, we requested to spend another night on the dealer’s lot. We were feeling pretty good as we left but that good feeling wasn’t to last very long. As we walked out to our rig, Wes asked us if we were aware that one of our axles was bent. Sure enough, we knelt down to look under the rig and could see a very noticeable bend in the front axle. Wes pointed out that the tires on that axle were already started to wear unevenly and, if not corrected, could result in a blowout. After a brief discussion, we decided to have the axle replaced even though it will mean some disruption to our summer travel plans. Wes asked if we could stick around on the lot until Monday morning so his parts man could see the parts that need to be ordered.

On Monday, June 12th, Phil took the truck for an oil change while Jan prepared for us to get on the road again. The parts man crawled under our rig to get the part numbers needed to replace our axle. We had headed down the road about 10 minutes when the dealership called to say they needed to get another part number. So, Phil returned to the dealership while Jan continued on to the first rest stop. After that brief interruption we continued on for 142 miles to Bear Canyon Campground in Bozeman, MT. The weather forecast was calling for severe weather across all of Montana and we were happy to get set up before the heavy rains and strong winds hit us. We had a brief period of hail, which brought back some bad memories, but it didn’t do any damage.

On June 13, we drove 100 miles through steady light rain to the West Yellowstone/Mountainside KOA. Fortunately the rain had stopped when we arrived and, although the ground was rather muddy, we were able to stay dry while setting up.