On October 26th we left Charlottesville and drove two hours to Williamsburg, VA. We spent two nights at the Thousand Trails campground in Williamsburg. We had received a free one-year membership when we bought our rig and had been considering renewing our membership for another year. However, after this experience, we will not be renewing it any time soon. The drive to our site was harrowing as the roads were very narrow and there were many trees dangerously close to the roads. One turn was so sharp that our trailer brake cable disconnected, causing our trailer brakes to seize up. We were quite relieved once we got our rig into the site. We watched the Cubs even up the World Series at one game apiece with a 5-1 win in Cleveland.

On October 27th we spent the day at colonial Williamsburg. We parked at the Visitor Center and bought our tickets. We were able to take advantage of a Fall special that, because we are over 50 years old, gave us unlimited visits until December 31st for the price of a one-day ticket. We walked along the path to the Governor’s Palace and took a guided tour. After the tour we wandered through the maze. 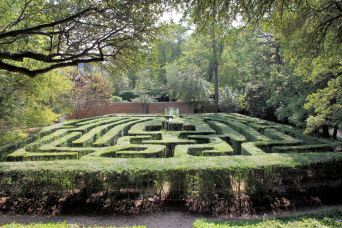 Harpsichord in ballroom of Governor’s Palace

Later we strolled the streets of colonial Williamsburg, including visits to Bruton Parish Church and the College of William and Mary. We ate a late lunch at the Chowning Tavern.

Plaque at College of William and Mary

Wren Building on campus of College of William and Mary

We headed back to the campground when it started to drizzle. As we approached the campground, it was apparent it had been raining harder there than it had in town. When we arrived at our site, we discovered that our power was out and we assumed that it was campground-wide. Our supersized inverter allowed us to run on batteries all evening but we began to get concerned as the batteries started to run down overnight. By morning, we had little power. Jan went to the office and found out that the outage was not campground-wide. The office sent a serviceman who tested our power pedestal and insisted that there was no problem with our 50 amp service. Despite this, our power management system would not accept the current. Phil used our 30 amp adapter and we were relieved when we were once again able to have power to our rig.

Since we had only been able to get a 2-night reservation at Thousand Trails, we had to pack up and move a few miles down the road to the Williamsburg KOA. Our first site was so badly sloped that we were unable to get leveled. We moved to another site and were able to get leveled, although it was still more sloped than we would have liked. We were relieved to find that we had no problem getting 50 amp service, proving that our power problem at the Thousand Trails campground was with their pedestal rather than our rig.

That night we watched the Cubs lose game three of the World Series 1-0 in a pitchers’ duel.

On October 29th we returned to Williamsburg. We started the day with a guided tour of the Capitol building. Later we strolled down Duke of Gloucester Street and visited a lot of the tradesmen and shops along the way. There were Halloween decorations all over the place. We visited the Courthouse and sat through a reenactment of several civil trials.

Phil with skeleton at Williamsburg 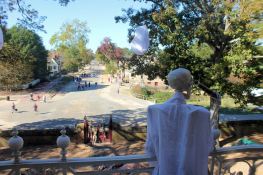 Chamber of Governor’s Council in Capitol 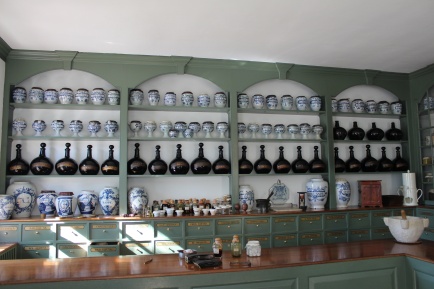 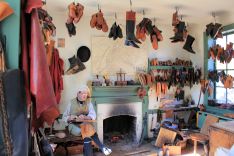 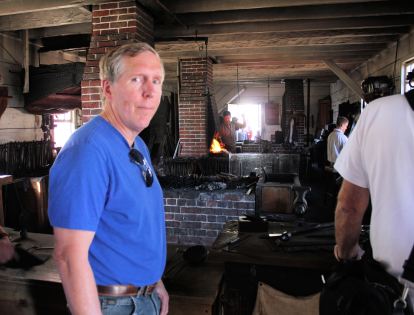 That afternoon we went for a walk around the campground and had a nice visit with a couple who had reached out to us via the RVillage website. We headed back to our site in time for trick or treaters. Unfortunately, we didn’t have many kids come by so we were left with a lot of candy (darn!). Later that evening we watched the Cubs play badly and lose game four of the World Series 7-2 and fall behind in the Series three games to one.

On October 30th we moved again, this time only about 35 miles to Chesapeake Bay Thousand Trails. This Thousand Trails was much nicer than the one in Williamsburg and, due to our Thousand Trails membership, only cost us $3 a night for 10 nights. Although the campground has a Gloucester, VA address, it is really in the boonies and requires an 11 mile drive to civilization. We knew we were going to have to contend with a back-in site but our larger concern was that, due to the lack of cable TV, we needed to find a site that would have a view of the open sky for our satellite TV dish. Upon arrival, we parked our rig and drove around the campground looking for a site with few trees. When we found one that looked ideal, we set up and then tried the satellite. Despite numerous attempts, we were never able to get a satellite signal. Not a huge problem, we thought; we can just rely on signals using our “over the air” antenna. No such luck; we couldn’t pick up a single channel.

With no TV reception, we needed to decide how we were going to watch game five of the World Series. It turned out that our only option in Gloucester was a very smoky sports bar. Not only were we surrounded by heavy smokers but most of the crowd was there to watch the Sunday night NFL game between the Cowboys and the Eagles. Fortunately, the Cubs won a very suspenseful game 3-2 to stay alive.

After spending $55 to watch the Cubs game at the sports bar and facing the prospect of another nine days with no TV, Phil was determined to get a satellite signal before the next game. He initially believed that he could get a signal simply by moving forward on our site. However, as we hooked up to move, we were advised by some of our neighbors that there are very few sites that are DirectTV accessible. We tried one that was suggested by a neighbor and, after watching the satellite dish circle the sky for several minutes, we were relieved when it finally locked in on a signal.

On November 1st we explored the campground and walked along the Piankatank River. We discovered the Adult Lounge and spent a couple of hours finishing a jigsaw puzzle that another camper had started. That evening, the World Series moved to Cleveland and the Cubs won 9-3, forcing a 7th game. We were able to watch from the comfort of our living room. 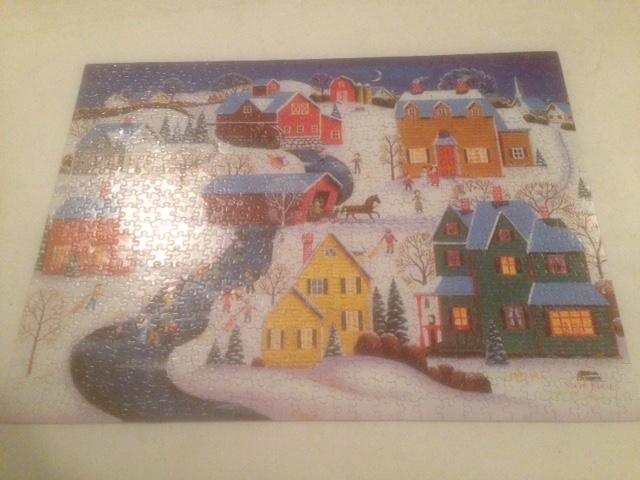 On November 2nd we visited Yorktown, the site of the final battle of the American Revolutionary War from October 6-17, 1781. We began at the Yorktown Visitor Center and walked to the Victory Monument. We drove the seven-mile Battlefield Tour covering the British Inner Defense Line, the Allied siege lines, the Moore House (where terms of surrender were negotiated), and Surrender Field. Then we drove the nine-mile Allied Encampment Tour through the American and French encampment areas.  We ended the visit to Yorktown with lunch along the riverwalk. 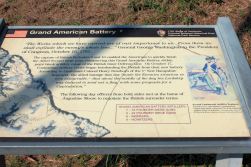 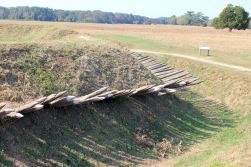 That evening, the Cubs won game seven of the World Series 8-7 in the 10th inning, clinching the World Championship for the first time in 108 years. We undoubtedly violated the Quiet Hours rules with all our celebrating.

On November 3rd we played pickleball for the first time since June and we were both quite rusty.

On November 4th we watched the Cubs celebration parade on the MLB channel for several hours. The crowd was estimated at 5 million, making it the largest crowd ever in North America and the seventh largest anywhere.

On November 5th we played pickleball with another couple, then drove about 30 minutes to Urbanna, VA for the 59th Annual Oyster Festival. Urbanna is a small waterfront community with a population of about 500. For the Oyster Festival the entire town is closed to traffic and we were forced to park in a cornfield quite a distance outside of town. The crowds were overwhelming. We passed on oysters for lunch and had clam strips instead. We watched the Oyster Parade that was quite long; then continued exploring block after block of craft stands. 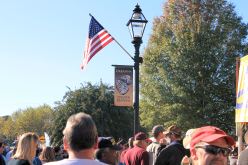 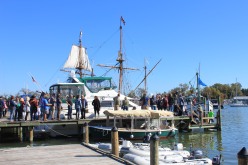 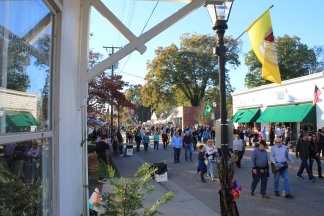 On November 7th we finished the third leg of the Colonial Virginia Triangle by visiting Jamestown. Jamestown, founded in 1607, is the oldest permanent English settlement in North America. After watching a short film in the Visitor Center, we took a trip back in time with John Rolfe (an English settler who married Pocahontas in 1614) who spoke at length about the challenges faced by the settlers in the first 14 years. We then walked around the excavated foundations of the expanded settlement on Jamestown Island. We strolled through the 1607 James Fort and the 1907 Memorial Church, then visited the Archaearium and saw many discovered artifacts from the original settlement. Finally, we visited the glasshouse where we watched an artisan demonstrate glassblowing techniques of the 1600s. 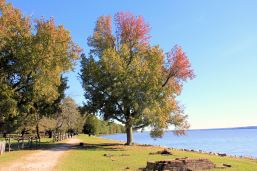 Tree along bank of James River 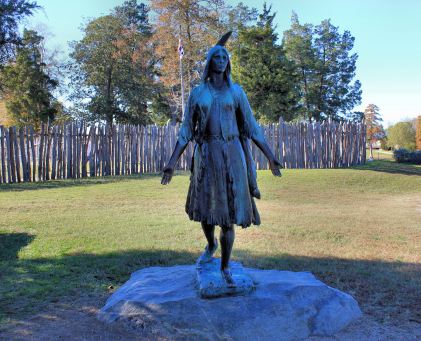 Recreated framing of the Barracks at Fort James 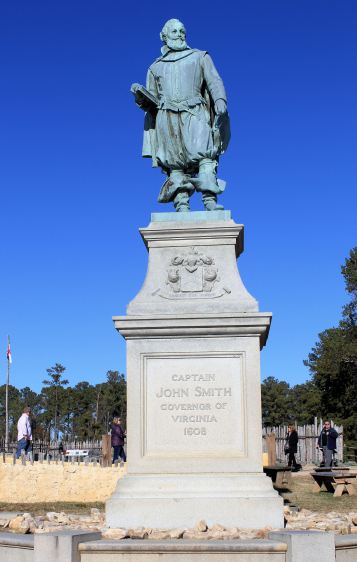 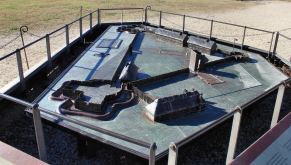 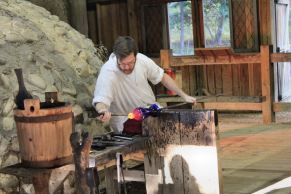 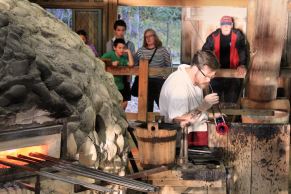 After visiting Jamestown, we took the Jamestown-Scotland Ferry across the James River to Surry, VA. We ate dinner at The Surry Seafood Company and both had crabcakes. We had a window seat and the view of the sunset over the bay was beautiful.

Sunset from deck of The Surry Seafood Company

View from deck of The Surry Seafood Company

November 8th was Election Day. We spent the day getting ready to leave and played some pickleball. That evening we stayed awake until 2:30 am watching the election results but we finally called it a night when Hillary Clinton’s spokesman said there wouldn’t be any more news until the morning. When we awoke on November 9th, we learned that Donald Trump had actually won the Presidency in a stunning upset. The combination of little sleep and rain forecast for most of the day led us to decide to stay put for another day. We spent almost the entire afternoon working on the jigsaw puzzle we had started a few days earlier. Being the obsessive types we are, we kept at it until we finished the puzzle, only to discover that there was a piece missing. On November 10th our stay in Virginia came to an end and we began our trip south. 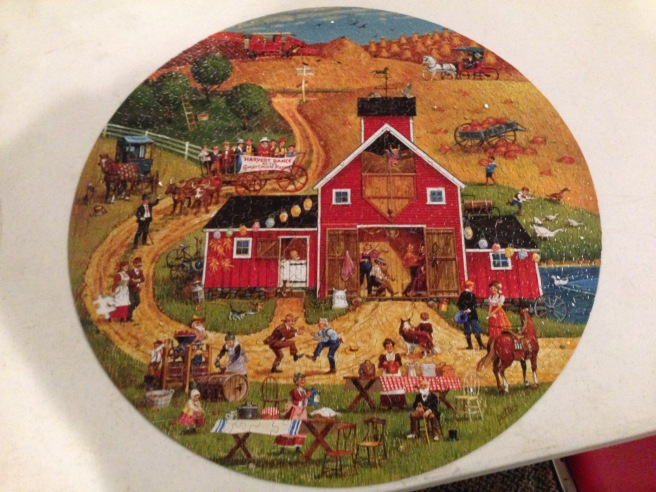