Since we were anxious to visit our daughter and son-in-law, Alison and Bill Lynch, we pushed our drive each day farther than usual.  Although we prefer to limit our drives to about 200 miles per day or take off-days when we’ve driven a long distance, we drove 260 miles each day for three days straight.

We spent our first night in Needles, CA at the Needles KOA.  The campground was located near historic Route 66.  Our site was a decent-sized pull-through that had a great view of the valley.  We really didn’t have much time to enjoy the campground amenities, though.  We had dinner at a local Mexican restaurant and then drove both vehicles back across the Arizona border where fuel was over $1.00 per gallon cheaper than in California.

The next day we rose early and drove to Bakersfield, CA.  The scenery was colorful along the way but grew somewhat monotonous after hours of seeing the same thing.  We stayed at the A Country RV Park and enjoyed it so much that we decided to stay there again on our return trip.  After setting up our rig and refueling both vehicles, we watched the Final Four games and then headed to bed early.

On Sunday we rose early again and headed to our destination in Felton, CA.  The first couple of hours were spent on Interstate 5 and took us through the farmland of central California.  Despite being an interstate highway, I-5 was unimpressive.  It was only two lanes wide in each direction.  Although the speed limit for cars was 70 mph, the speed limit for any vehicle pulling a trailer was only 55 mph.  That meant we needed to spend nearly the entire drive in the right-hand lane or risk getting run over by cars travelling at a much higher speed.  While the left-hand lane appeared to be in good shape, the right-hand lane was very rough.  After exiting I-5, we drove on a number of small highways that took us west to the California coast. These highways had lots of turns and many steep ups and downs.  We were very happy to arrive at our campground at Santa Cruz Redwoods RV Resort in Felton.  We were given a back-in site but we had plenty of room to maneuver our rig into our site without too much difficulty.  Rather than pay $20 per night for keeping a second vehicle at the campground, we took our truck and left it at Alison and Bill’s apartment for the week before heading out for dinner with them.

On Monday we started the day with a hike on the Redwood Grove Loop Trail at Henry Cowell Redwoods State Park.  The trail took us around a 40-acre grove of coast redwood trees, the tallest tree species on earth.  Some of these trees are over 2,000 years old. 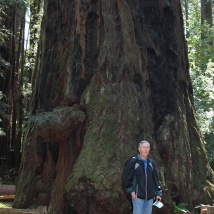 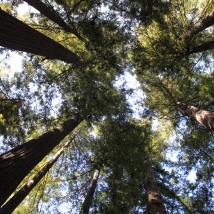 We also explored the Roaring Camp Railroads station where narrow-gauge steam locomotives take passengers on trips to the Santa Cruz beach or to the summit of Bear Mountain. 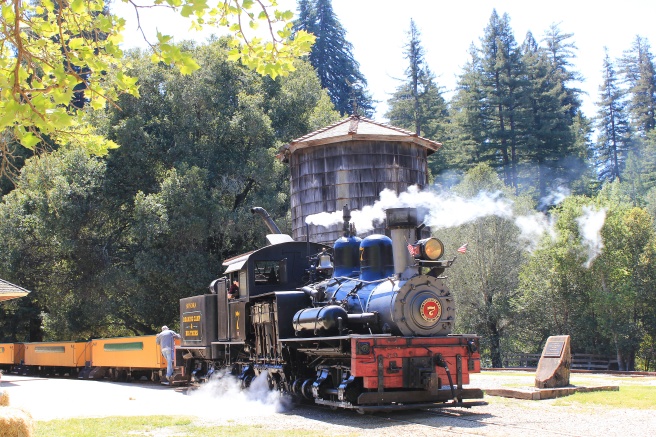 Next we headed down the narrow and sharply winding Highway 9 in search of the Ox Fire Road trailhead.  Unfortunately there were no parking spaces available at the trailhead.  The highway was too narrow to allow us to turn around so we had no choice but to continue down the road to Santa Cruz.  We decided to visit the Santa Cruz wharf while we were nearby.  We saw lots of sea lions camped out on the wharf and in the water. 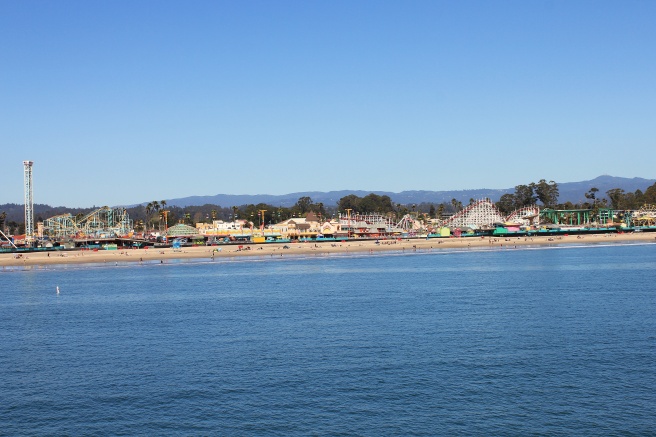 After visiting the wharf, we returned up Highway 9 and found a parking space at the Ox Fire Road trailhead.  Although the trail was easy to follow at first, we then lost track of it and instead followed the railroad tracks until we came across a trail down to a beach along the river. 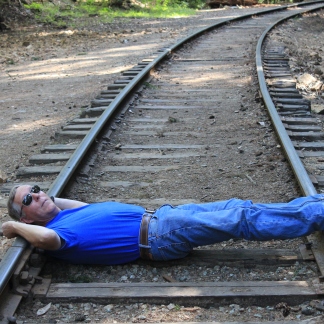 We went to the beach near the Capitola wharf for dinner.  After dinner we wandered down to the beach so Jan could stick her feet in the Pacific. It was cold! 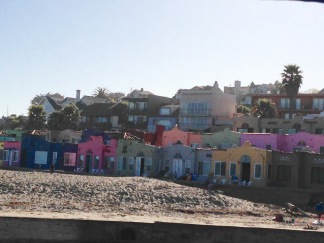 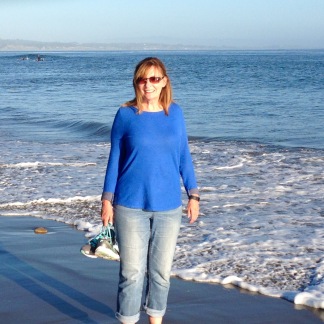 On Tuesday we drove to Monterey Bay.  Along the way we stopped in and visited Alison at the campus of California State University – Monterey Bay where she is a first-year faculty member of the Mathematics and Science department.

Next we visited the Monterey Bay Aquarium.  In addition to viewing the many impressive exhibits, we were able to watch the feedings of an albatross and the penguins, as well as a huge number of fish fed by a diver in the Kelp Forest exhibit. 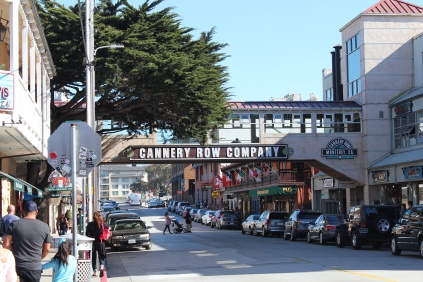 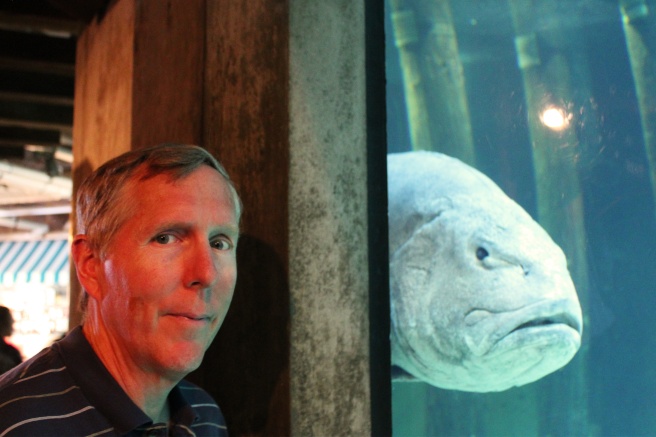 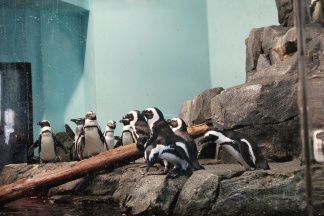 On Wednesday we returned to Monterey Bay to do the 17 Mile Drive.  We stopped at nearly all of the 21 viewpoints listed on our map and took many pictures.  In Crockett Grove we saw the oldest Monterey cypress trees in existence.  We ended the drive at the Pebble Beach golf course where we watched a couple of foursomes finish their rounds on the 18th green before we had lunch at the Pebble Beach Market. 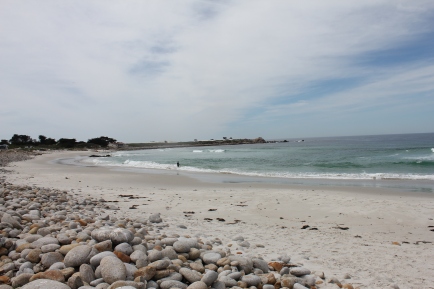 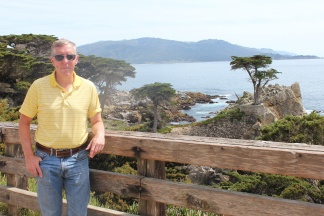 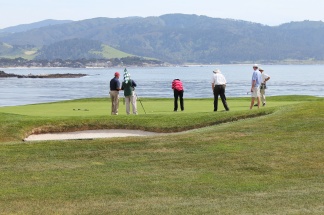 On Thursday we drove up to Mountain View to visit Bill’s office at Google.  Bill walked us around the Google complex and we had lunch at one of the many Google dining rooms (all free for Google employees and guests).  After Bill returned to work, we visited the Google merchandise store and took pictures of the Android sculptures. 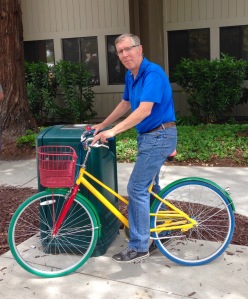 On Saturday we spent the Day with Alison and Bill exploring Santa Cruz.  We began the day at the Seymour Marine Discovery Center, a part of the University of California, Santa Cruz.  Among the many interesting exhibits, we were able to touch sharks, starfish and anemones.

Next we walked along West Cliff Drive overlooking the ocean.  We watched many surfers and then visited the small Santa Cruz Surfing Museum where they had displays showing the history of the surfing movement in the Santa Cruz area.  After lunch, we explored the Santa Cruz boardwalk. 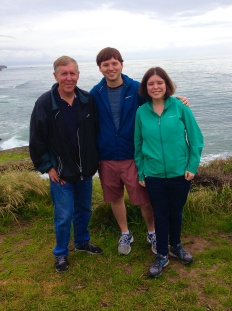 Sunday was our final day with Alison and Bill.  They came to our campground and we visited the Felton Covered Bridge Park.

On Monday we left the Santa Cruz area and traveled to Paso Robles where we stayed overnight at the Paso Robles RV Ranch.

We arrived in time to drive to Morro Bay where we walked along the waterfront shops before stopping for calamari and chips.

On Tuesday we returned to Bakersfield where we stayed at A Country RV Park again.  It was a rather scary drive as we went through the hills.  There were many sections where the fog was so thick we could barely see a car length in front of us.  It was out 13th wedding anniversary as well as our 6 month anniversary as full-timers.  We celebrated with dinner at the Hungry Hunter Steakhouse. 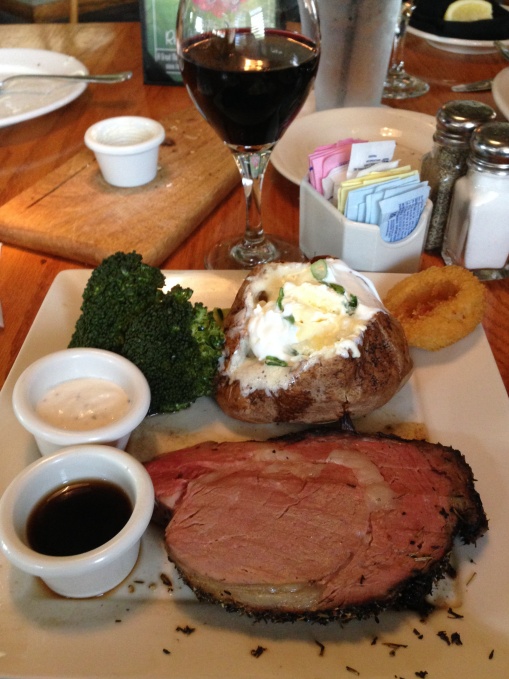 The following day we traveled to Barstow where we spent the night at Shady Lane RV Camp.  On April 14th, we left California and made a very windy drive to Las Vegas.  The wind was blowing at 20 mph when we left Barstow but there were gusts in excess of 40 mph.  We struggled to walk back to our vehicles at the rest stop due to the strong winds and blowing sand.