Our drive across Arizona was pretty simple since we spent most of our drive on Interstate 10.  Our first two nights were spent at the Magic Circle RV Park in Willcox, AZ.  The park was fairly large but there were only about 20 rigs there during our stay.  The entire park was gravel but we had a decent-sized pull-through site.  The owner was very helpful and gave Phil directions to a local gas station where he was able to buy diesel for about 30 cents per gallon cheaper than by the interstate.

We had wanted to visit the Chiricahua (cheer-a-COW-a) National Monument but the scenic road was closed for road work.  Instead, we spent our only full day in Willcox visiting the Fort Bowie National History Site.  Fort Bowie was an unusual attraction since it required an 8-mile drive down a dusty dirt/gravel road to the trailhead and then a 1.5 mile hike each way to and from the Visitors Center at Fort Bowie. There were several sights along the hike and signs explaining the historical significance of what we were seeing.  The scenery was beautiful.  The ranger at the Visitors Center was quite helpful in explaining more about the history of the fort as well as telling us about other worthwhile local attractions. Fort Bowie was built to house U.S. military soldiers whose purpose was to protect American settlers and stages from the Chiricahua Apaches.  The ranger explained that the Apaches and the white American settlers had gotten along very well at first but that the Apaches despised the Mexicans.  The Apaches had been exiled from Mexico to the Chiricahua Mountains in what is now Arizona but the Apaches continued to raid Mexican villages.  When the U.S. acquired this territory as part of the Gadsden Purchase in 1853, the Mexican government pressured the U.S. government to crack down on the Apaches who were led by Cochise.  This led to the Apache Wars that continued until 1886.

The following day we headed to Tucson where we stayed at the Desert Trails RV Park for 17 days.  Desert Trails is on the site of a retired water park and the layout of the RV park is somewhat haphazard.  We were given a site that was parallel to the side of the pool hall.  Backing into our site required a bit of a guessing game.  We needed to be as close as possible to the building but allow enough room for our driver-side slides to extend without hitting the eaves of the pool hall.  It took a few tries but Phil managed to get our rig backed in with a foot to spare between our bedroom and the building eave.  There were a couple of major advantages to our site.  First, the building helped block much of the afternoon sun.  Second, there was a WiFi repeater on a pole attached to the pool house eave, only about 2 feet from our living room.  As a result, we had the best WiFi we’d ever had at a campground.  We had originally only planned to stay a week but, after the challenge of backing into our spot, we decided to extend our stay. 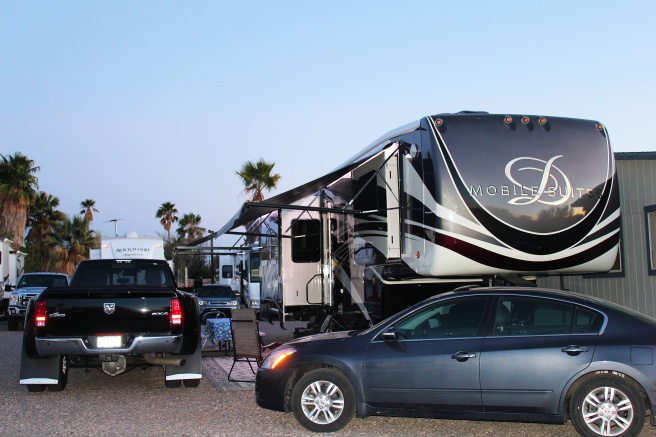 The Desert Trails RV Park has walking trails to the Tucson Mountain Park and the Saguaro National Park.  We enjoyed getting up and hiking in the desert most mornings before the weather got too hot.  There were numerous trails that were fairly easy to follow. 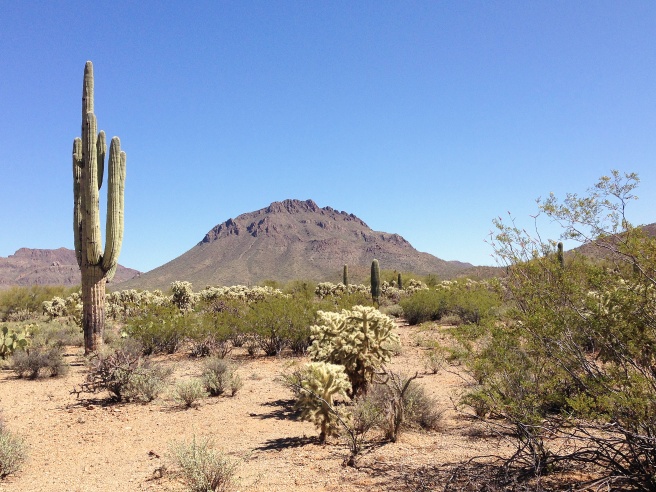 On March 15th we decided to escape the heat and drive into the mountains.  We did the 22-mile Sky Island Scenic Byway up to Mount Lemmon.  There were numerous vistas where we were able to park and enjoy the views.  The summit was at an elevation over 8,000 feet and there was snow along the road in some places.  We had lunch in Summerhaven, a small town near the summit, and were able to sit outside. 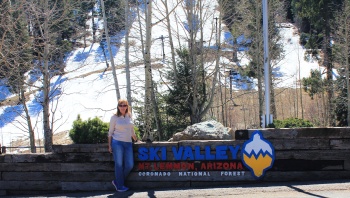 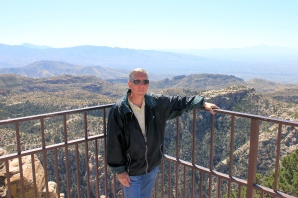 On March 21st we headed back across Tucson to hike in Sabino Canyon.  We had heard that it was important to arrive early since parking was limited.  Despite arriving at 9 a.m. on a weekday, we still had to drive around the parking lot for 20 minutes until we found someone backing out of their parking spot.  There are numerous hikes in Sabino Canyon but the one that sounded the most doable for us was the Phoneline Trail.  We took the shuttle up the canyon to the final stop and climbed to the beginning of the Phoneline Trail.  It was quite a bit steeper and longer than we had expected but we persevered.  Although we had expected to only hike about three miles, we ended up walking over seven miles that day. 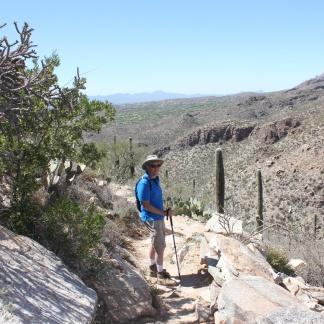 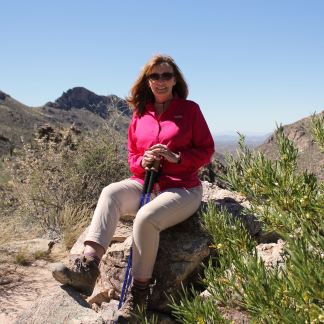 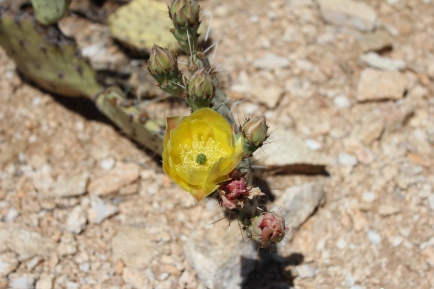 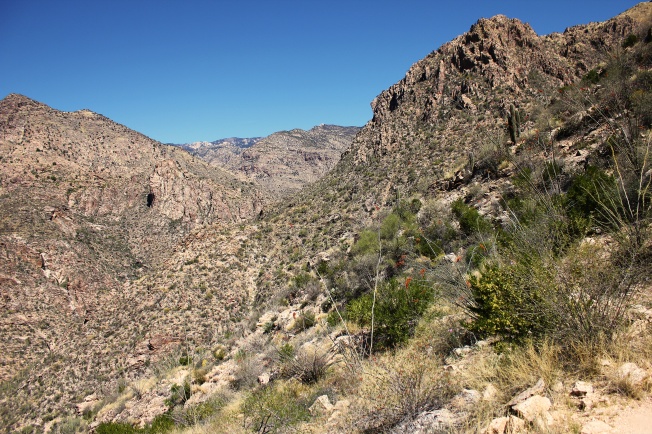 On March 22nd we went to the Arizona – Sonora Desert Museum which was a short drive from our campground.  In addition to having a tremendous amount of desert plants, the museum is a wildlife preserve for a large number of desert animals.  We saw javelinas, a coyote, a mountain lion, vultures and numerous birds and reptiles.  We also spent time in the hummingbird enclosure.  In total we spent over four hours touring the museum.

On March 25th we left Tucson and moved to the Apache Palms RV Park in Tempe, AZ.  Jan’s cousin Lori and her husband Bruce flew into Phoenix on Monday to visit for a few days.  We spent the first day touring Sedona.  After spending the afternoon exploring a variety of shops, we took the Scenic Rim Pink Jeep tour at 5 pm.  It was an extremely bumpy ride as we drove up the red rock hills to some beautiful vantage points.  We had a fine dining experience at In-N-Out Burger for dinner. 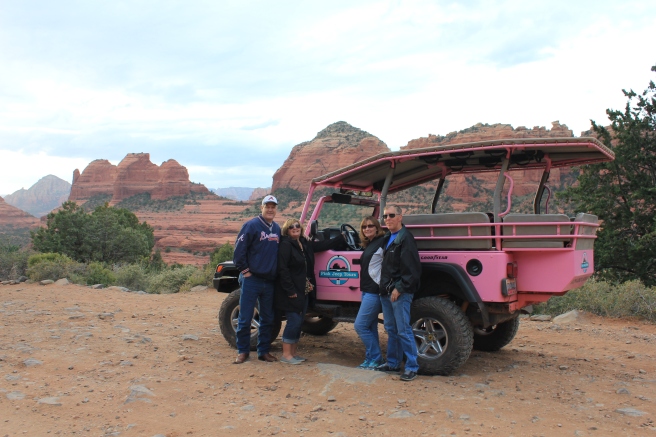 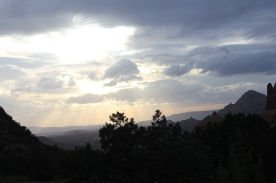 The following two days were spent at Chicago Cubs’ Spring Training games.  The Cubs won both!  We also did some shopping and dining in Old Scottsdale. 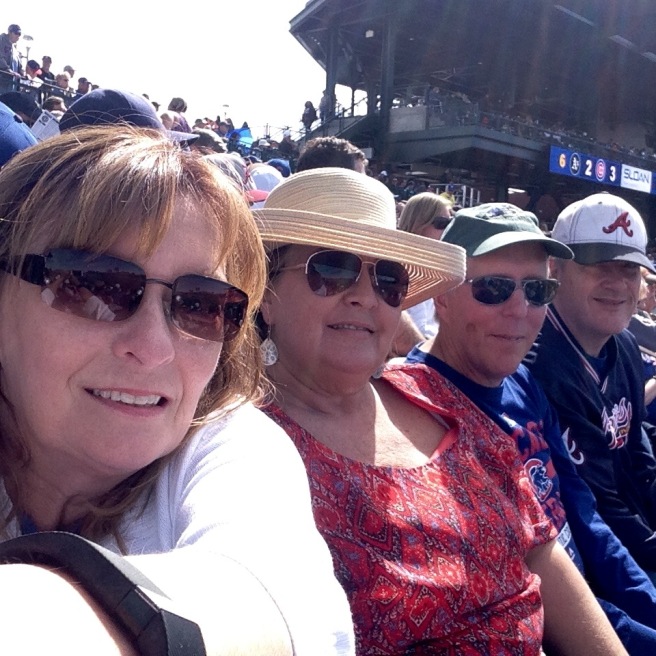 It was great having Lori and Bruce visit us. They were our first overnight guests in the fifth wheel.  As they flew back to Nashville on Thursday, we spent the day getting ready to hit the road again. We left for California on Friday morning, April 1st.

As a general rule we try not to drive more than 200 miles in a day.  However, since there was not much to see along I-10 in west Texas, we ended up driving 530 miles over our first two days after leaving Kerrville.  Fortunately we barely had to leave the interstate the entire trip.  We drove 230 miles the first day and spent the night at the Fort Stockton RV Park.  The site was a pull-through that was easy to get into.  The park had a restaurant but, since the cook was off, they brought in pizza and we got a free dinner.

We pushed it even farther the second day, covering 300 miles before stopping at Las Cruces, NM.  We had decided to spend four days in Las Cruces, both to explore the sights and to rest up after the long drive.  We stayed at the Las Cruces KOA.  The site was the narrowest one we’d ever stayed in and required us to park one of our vehicles in the overflow area.  Despite this, the KOA was on top of a hill and our view of the mountains was great. 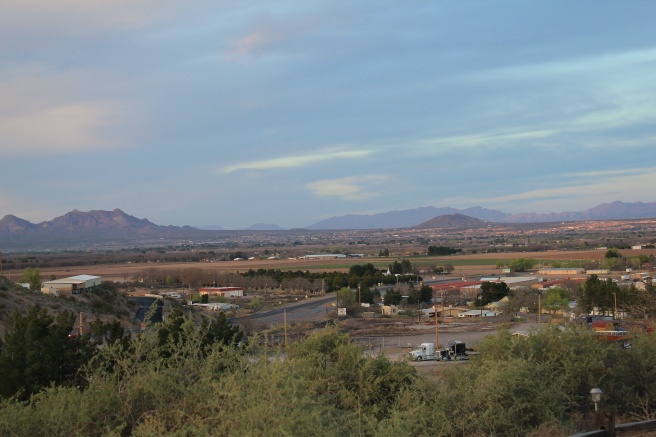 Jan had spotted a large roadrunner statue along the highway as we drove into town and we had to visit the rest stop to get these pictures.

On Saturday morning, we first visited the Farmers & Crafts Market of Las Cruces.  The market covered seven city blocks on Main Street and included the stands for over 300 vendors.

Next we toured La Mesilla, a village near Las Cruces that had a rich history in the 1840s-1880s first as a Mexican colony and then part of New Mexico.  Now Mesilla is more of a tourist attraction with more than 50 shops and restaurants.  One of the shops we visited was once the courthouse where Billy the Kid was jailed and sentenced to be hanged. 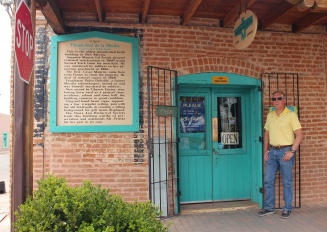 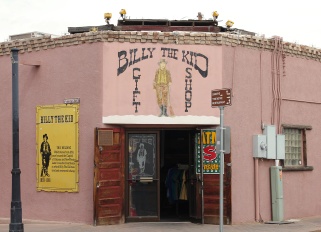 On Sunday, we hiked the Dripping Springs Trail that took us to the ruins of an old resort, to a waterfall fed by the Dripping Springs, and to the ruins of a sanatorium that had been used to treat patients with TB at the turn of the century.  Since the trail took us to an altitude of over 6,000 feet, we were huffing and puffing a good part of the hike.

On Monday, we did another hike.  This one, the Bar Canyon – Soledad Canyon trail, took us to the ruins of an old stone house and then deep into a canyon to see a waterfall. 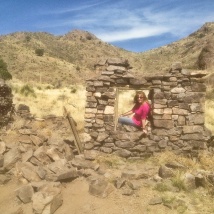