The drive from Willis to San Antonio took longer than expected.  We intentionally took a back roads route rather than have to contend with the Houston beltway.  However, as soon as we reached Interstate 10, we ran into a massive traffic jam.  We sat in bumper-to-bumper traffic for nearly an hour until we passed the point where the interstate narrowed down to one lane.   This was not good for our fuel consumption and the Ram ended up consuming 28 gallons of diesel just to cover the 245 mile trip.  As usual, we were quite tired at the end of the drive and were very glad to find that our site was easy to pull into and set up.

We had selected the Travelers World RV Park due to its proximity to downtown San Antonio.  Rather than having to pay the high cost of parking lots near the downtown attraction, we were able to catch a bus right across the street from the RV park.  We bought all-day passes for $4 each on December 31st and headed downtown in the morning to do our initial exploring.  The temperature was in the low 50s but the wind made it feel colder.

Our first stop was at the Alamo.  Although there was a long line to enter the Shrine, the line moved quickly and we were glad we had waited.  As we had read previously, the Alamo is not very big but they did have a number of very interesting displays, including one of Davy Crockett’s rifles.

After the Alamo, we went to the Riverwalk to find a place to have lunch.  The place was quite busy.  In addition to being New Year’s Eve day, the Alamo bowl was scheduled for January 2nd and there were lots of Oregon and TCU fans on the Riverwalk.  We strolled for a while checking out our options and finally decided on a barbeque restaurant where we had lunch outdoors right by the river.  After lunch we strolled the Riverwalk some more before returning to the RV park. 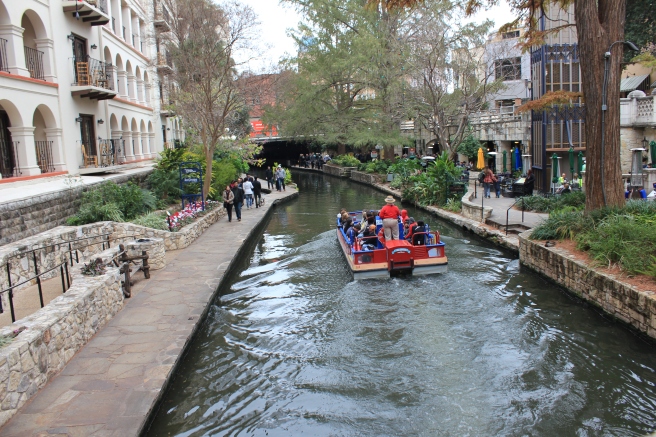 That evening we hopped back on the bus and headed back downtown.  We headed to Howl at the Moon, a highly-recommended piano bar.  We got there about 7:45 pm and, although the line was fairly short, they were asking for people with reservations.  We had not anticipated the need for reservations for so early in the evening but, in hindsight, that was a big mistake.  We were charged a non-refundable cover charge but were not told that it was standing room only.  Needless to say, we were not happy campers when we ended up having to stand with our coats in our hands.  We watched the show for about 1 ½ hours before deciding to go find someplace to eat.  That also turned out to be a challenge as every restaurant either had long lines or had stopped taking names.  We finally got into Joe’s Crab Shack around 10:30 pm and, after dinner, beat the rush by catching the 11:30 pm bus back to the park.  We got to see lots of fireworks all around us as we walked back to our rig and watched the ball drop in San Antonio on TV.

The next two days were quite rainy.  We spent all of New Year’s Day at home, mostly watching bowl games.  We were glad to see the Vols win their game in a rout.  On Saturday, we ventured out and saw more of the city by car.  Our GPS had a mind of its own and we ended up making numerous wrong turns.  We shopped at Lowes and a local produce market before heading to the North Star Mall.  The mall was packed and looked like pre-Christmas shopping season, probably due to the lousy weather.

On Sunday, it was time to move on.  We were both glad the drive to Kerrville was a short one, however not as short as our GPS indicated.  We’ve discovered that the GPS and online maps base all their times on highway speeds which are frequently 75 mph in Texas.  We don’t drive faster than 65 mph.  The GPS also seems to ignore the time spent at traffic lights which was significant.  Anyway, we were glad to only have a 65 mile trip and we arrived in Kerrville around 1 pm.  We got a sense for why Kerrville is considered part of the Texas “hit country” when the truck struggled somewhat to get the 19,000 lb. fifth wheel up the steep grades.  Although our time in San Antonio was short, we will only be about an hour away during our month in Kerrville so we might be back.